In the PEI Buzz : https://buzzpei.com/imagining-anne/

In the UPEI News: https://www.upei.ca/communications/news/2019/07/dr-elizabeth-epperly-launch-compilation-lm-montgomerys-scrapbooks

On June 5th I got this wonderful piece of news from the editors, Dr. Kate Scarth and Dr Emily Woster, of the L.M. Montgomery Institute’s new on-line, open-access journal:

“We’re delighted to announce that the journal is now live at journaloflmmontgomerystudies.ca!

Thanks to all of you for your work on and support of the journal. On the website you’ll find our Welcome Message, a video announcing the journal, an article by Elizabeth Epperly (“Reading Time: L.M. Montgomery and the ‘Alembic of Fiction'”), and an article by Julie Sellers (“‘A Good Imagination Gone Wrong’: Reading Anne of Green Gables as a Quixotic Novel”), as well as the static content that many of you have given feedback on. Acknowledgments are here. There’s more content coming soon!

Just a reminder that the journal accepts and publishes submissions on a rolling basis so keep those submissions coming and encourage your colleagues to submit too.

Early in June this fabulous news came through from the editors, Dr. Rita Bode and Dr. Jean Mitchell, that their essay collection (inspired by an international biennial L.M. Montgomery Institute conference at the University of Prince Edward Island) and published by McGill-Queens University Press in 2018, has won the Gabrielle Roy Prize (English) for all of Canada.  I am thrilled, as one of the contributors to the volume, and delighted that the judges made a special point of commenting on Montgomery’s relevance to current scholarship and life:

” _LMM and the Matter of Nature(s)_ has been awarded the Gabrielle Roy Prize_. This is an award for each and every one of us for the outstanding work that makes up the volume. This is a wonderful recognition of our collective hard work and a superb recognition of Montgomery’s important place in cultural and literary history.

Here is more information on the award including the criteria of evaluation:http://alcq-acql.ca/prizers/gabrielle-roy-prize-regulations/

The citation for the volume includes the following comments from the jury: members:This well-curated collection of essays approaches the intersection of humanity and “nature” from diverse and exciting perspectives.  Although the individual essays come from a variety of fields, including (but not limited to) literature, animal studies, and law, the collection is both concise and coherent.  These excellent analyses of familiar texts and figures provide new and useful insights into individual works and the larger field of ecocritical studies generally.  L.M. Montgomery and the Matter of Nature(s)illustrates what anyone familiar with the orchard in Anne of Green Gables already knows–that Montgomery’s flair for pastoral writing is among her finest attributes as a serious writer.  However, the conceptual underpinnings of the collection shed new light on how this relation between place and character is part of a more sophisticated ecology of beliefs and behaviours that are urgently needed in a world facing widespread environmental degradation, accelerating climate change, and mass extinctions of flora and fauna.”

Picturing the bo(a)orders: graduating, in 1969, after three years at St. Catherine’s School for Girls in Richmond, Virginia, and composing a life between the lines.

In the summer of 1968, my mother and I made a pilgrimage to Prince Edward Island, Canada, the setting and inspiration for L.M. Montgomery’s Anne of Green Gables.  PEI felt like home; I vowed to return.  Secretly that fall, I applied to only one college: Prince of Wales College, L.M. Montgomery’s alma mater, in Charlottetown, Prince Edward Island.  After our June 1969 graduation and much too late to apply anywhere else, I received a letter telling me PWC no longer existed but I could come to the newly amalgamated University of Prince Edward Island if I wished.  Yikes! But of course I went and was so early that I was the very first student to register at the new school.

Except for the time I spent in England doing a Ph.D., I stayed in Canada and  became a Canadian citizen; taught English literature for thirty years in two universities; founded a research institute in 1993 devoted to the study and informed celebration of Montgomery’s life, works, culture, and influence (www.lmmontgomery.ca); wrote books and articles on Anthony Trollope and on Montgomery; and eventually served as the first woman president of the University of Prince Edward Island (www.elizabethepperly.com).  I became Professor Emerita of English in 2007 and received an honorary doctorate ten years later.  That is the black-and-white snapshot.  The colour version has warmth and a laugh track.

When I graduated from St. C., I thought I would be a writer of fiction and a geologist.  I imagined I would live again in Virginia. I assumed I would probably get married and have children of my own.  I am so glad life has surprised me again and again!  I still love fiction and rocks, and my partner (of almost 30 thirty years) and my step children and step grandchildren remind me every day that Wordsworth was right: we do half create what we perceive. The other half is a gift.

It was an honour to provide the “Afterword” for Benjamin Lefebvre’s new edition of L.M. Montgomery’s posthumously published fiction The Blythes Are Quoted. 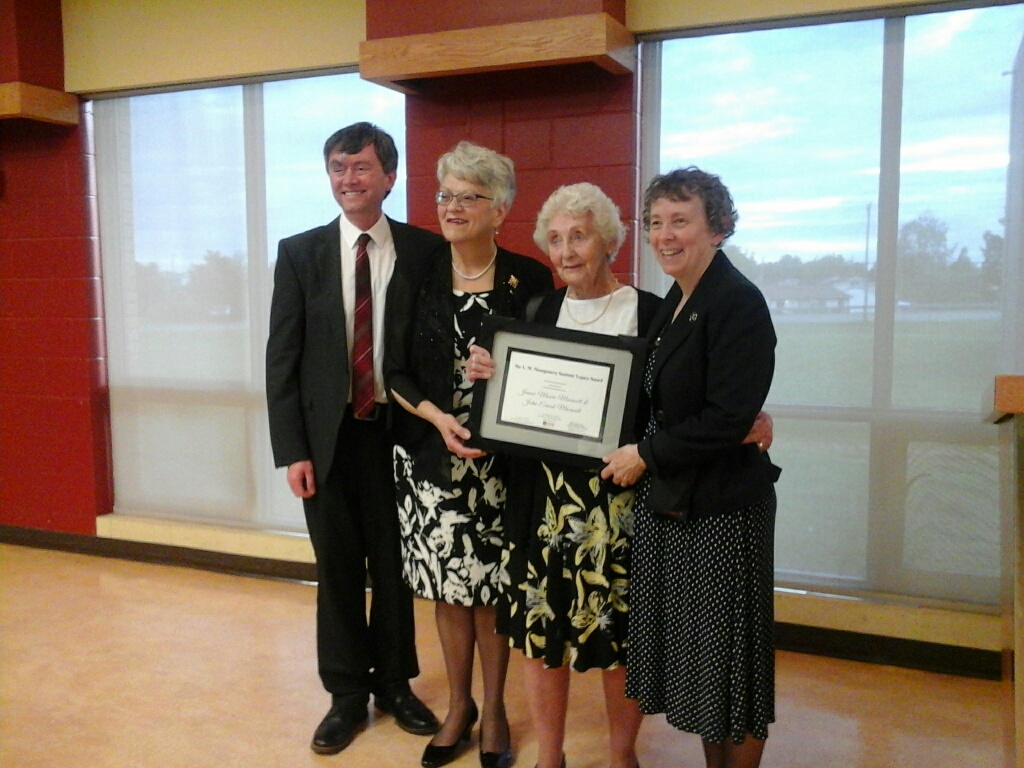 It was a wonderful moment at the 13th biennial conference banquet when Jennie Macneill received an LMMI Legacy Award for the work she and the late John Macneill have done in creating, developing, and maintaining the Site of Lucy Maud Montgomery’s Cavendish Home.  Their son David Macneill now runs the Site (where a Project Bookmark was unveiled on June 24th).

From left to right: Dr. Philip Smith, the Honourable Antoinette Perry, Jennie Macneill (recipient of an LMMI Legacy Award), and me.